Yet Qnotes couldnt be bother to check it out. let see WCTI12 had coverage of the rally. so did the Daily Reflector, click here,
at June 27, 2013 No comments:
Email ThisBlogThis!Share to TwitterShare to FacebookShare to Pinterest

The only Doma Protest in NC was in Charlotte, according to Qnotes

“We’re here today to say that anything is possible in this country and that we have to fight for every single right we have,” organizer Lacey Williams said during the rally.

As usual Qnotes only reports about event in Charlotte while giving any other cities a food note in the story,,

Other celebrations were held elsewhere across Charlotte and the Carolinas. Supporters of the Human Rights Campaign, the nation’s largest LGBT civil rights organization, gathered for drinks at a celebratory reception at Cathode Azure, a gay bar in South End. In Columbia, SC Equality held a march to the South Carolina State House. In Raleigh, Equality North Carolina convened supporters for an event at Pullen Memorial Baptist Church.

As usual they leave out Greenville who had there rally which was also on TV. It would seem that Qnotes just don’t care about the rest of NC.. Only Charlotte.. I guess it would have been to hard to search the web for events in other part of NC, to find the list them too..

You are receiving this message because you are the admin of a blog hosted on Blogger which is identified to have Adult content.

If your adult blog currently has advertisements which are adult in nature, you should remove them as soon as possible as to avoid any potential Terms of Service violation and/or content removals.

at June 27, 2013 No comments:
Email ThisBlogThis!Share to TwitterShare to FacebookShare to Pinterest

Gayinc is piss, cause the IFI is calling for Public Morals laws to be enforced during Pride. 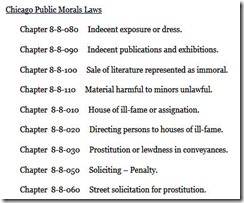 Though open containers with alcoholic beverages are illegal during the Gay Pride Parade, missing in official police and parade rule announcements, however, are warnings against violating the Chicago Public Morals Laws, which have been on the books for years and rarely, if ever, enforced in the Boystown gay district throughout the year.
The month of June was designated as LGBT “Pride Month” by proclamation from Mayor Rahm Emanuel featuring dozens of social, cultural, athletic and political events scheduled by various sponsoring groups, culminating with the 44th annual Chicago Gay Pride Parade on June 30th at noon. The grand marshal for the parade is former NFL player Wade Davis. Parade organizers claim to attract hundreds of thousands of onlookers each year, including young children.
Use IFI’s advocacy system to contact Chicago Police Superintendent Garry McCarthy and 19th District Commander Elias Voulgaris and respectfully urge them to enforce Chicago Public Morals Laws. No one person, group or organization should be above laws that protect citizens from public indecency and lewd behavior.

at June 25, 2013 No comments:
Email ThisBlogThis!Share to TwitterShare to FacebookShare to Pinterest

Extra Extra Read all about, Pam is shutting Down Pam’s House Blend

yes its true, She shutting down her very popular blog..

My decision to close the blog is just as reality-based as its content has been. If I cannot produce material at the frequency or with the same level of quality, enthusiasm and effectiveness, it’s really time to close the doors to this coffeehouse — and work to ensure it continues to have a life as an archive, a snapshot in our digital political history. Pamshouseblend.com will redirect to archives.

I must confess I will be sorry to see it go. True, sad but yes…