Fred Phelps near death via (@tlrd)


Sent from my iPhone
at March 16, 2014 No comments:
Email ThisBlogThis!Share to TwitterShare to FacebookShare to Pinterest

at March 11, 2014 No comments:
Email ThisBlogThis!Share to TwitterShare to FacebookShare to Pinterest
Labels: Gay Inc. 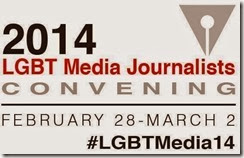 This weekend a group of top LGBT bloggers and journalists (decide by Bill of the Bilerico Project) from across the US are converging on Washington, D.C. for this year's LGBT Media Journalists Convening, sponsored by the Haas, Jr. Fund and hosted by the National Lesbian & Gay Journalists Association.

Yes Bill has managed to get more Funds from the Crypt Keepers at Haas Jr. Foundation.

This Year it’s all about Bi-inclusive and touring the White House, Let’s hope no one will be taking a selfies of themselves giving the Nation the middle finger again like last time.. They will have panels on everything from debunking Anti-LGBT attacks to increasing diversity in queer journalism.. Then the usual everyone for themselves after panel cocktail party at some local bar, within walking distance of the Hotel..

However these freeloaders decide to talk about Aaron Schock Sex life, claiming that bisexual folks are mostly abuse individuals. And that most Bi-women are survivors of sexual abuse/rape. The need, to have a talk about race and class relations within our community.

One attendee doubt that any LGBT activist/journalist could ever risk an honest article examining the role of sex has in their own work and organizing. Another claim you can’t talk about race without being called a racist. Then you have them talking about equal levels of homophobia among the Trans-community as trans-phobia among gay people. Also the term gay couple is out and same sex couple is in via #gayinc talking points memo.. Then  you have those making the following statement, “the average American still doesn’t know what transgender means.” Hell most Transgender don’t either.. I’m shock that they didn’t or they might have bought up the “cis” shit.. Another claims that we need to educate America..

Of Course after making a few comments, one tweeted back wondering when I would show, and ask if I was jealous, and a sad person. Then the same person asks if I would have come to the convening if I was invited, the answer is Hell fucking NO. For one I don’t need a foundation to pay my way or give me a mini vacation..

I have to wonder how Bill picks these people, these are the same people (almost) every year at these little get together..

The Following were invited,