The Kept Boy (goodasyou) picking on a working guy 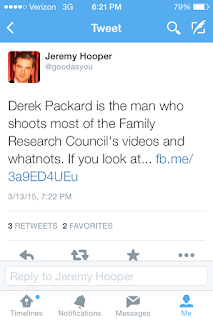 Now it funny how he is picking on/harassing a guy who makes the videos for NOW. so gayinc is now going after those who get a paycheck from NOW.

Jeremy just because you are kept-boy doesn't make you better then anyone else
at March 14, 2015 No comments:
Email ThisBlogThis!Share to TwitterShare to FacebookShare to Pinterest

Wow, You won’t believe this, life returns to GetEqualNC..

GetEqual NC, might be coming back to life, after almost dying out.. for lack of community support and very bad leadership here in NC. 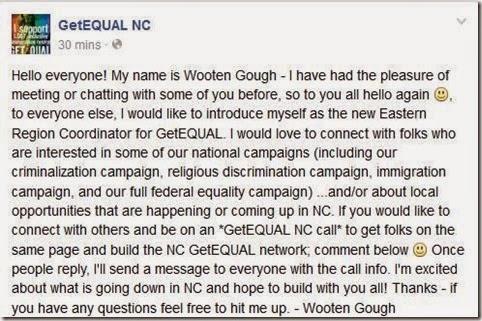 So just would is this Wooten Gough?

Wooten was born in Winston-Salem, NC and grew up in very rural Yadkin County. In high school, Wooten made new friends that he later found out were undocumented. From there he went to UNC and created Students United for Immigrant Equality and ended up joining the Trail of Dreams, walking with them from Richmond, VA to Washington, DC. Wooten was hired by the Latin American Coalition in 2010 and it was then that El Cambio was formed at the annual Fourth of July Festival in downtown Yadkinville. He now focuses building power in rural communities at the intersection of LGBTQ equality and immigrant justice.

Here is his Facebook and Gplus, for more info.

My question is will they still hide behind Equality NC ?? Are, we they take center stage!

at March 11, 2015 No comments:
Email ThisBlogThis!Share to TwitterShare to FacebookShare to Pinterest

This Past Monday Charlotte City Council meet to debate a LGBT protection measure bill, which would protect all LGBT from discrimination in Public accommodations. Which a course brought the fundies out.

The vote was very close, but failed by a 6-5 vote , this was the second time in two decades that Charlotte has rejected this type of ordinance.. If it did pass Charlotte would have been the first city in NC to pass LGBT-inclusive public accommodations and other protections. Which would meant that LGBT people couldn’t be deny service in businesses open the public, like restaurants, hotels, bars or movie theaters.

Now Janice Covington Allison, who is a Transgender person is calling for the LGBT and it allies to harass one the loudest fundie that was here. How you might ask, she public post his phone number on Facebook. 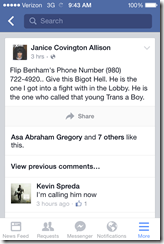 “Flip Benham’s phone number (980) 7XX-XXXX, ( I won’t be apart of this) Give this Bigot Hell. He is the one I got into a fight with in the Lobby. He is the one who called that young Trans a Boy.”

Ok, yes this guy Is a jerk on many levels, but to publicly post his number and asking folks to call and give a piece of their mind is wrong, and if the shoe was on the other foot, Even she would be bitching that is wasn’t polite, and it was/is harassment.. Period..

We can’t have it both ways..

What lead to the above attack on flip Benham, via Qnotes, Flip and Anti-lgbt activist confronted an Transgender teenager at the Government Center bathrooms. (note: Qnotes love to keep throwing up that Flip was once convicted for stalking a local abortion DR..) the young trans-gender person Olivia used the women restroom, which piss Flip off.. He call her a young man who should have used the men’s room. (note: Qnotes didn’t used her last name because of safety reasons..(bullshit) yet is ok to publish the haters info).  the other is that Ms. Allison was also confronted by an anti-lgbt activist on the second floor. (note: qnotes wasn’t able to speak to her about it, but she confirm it via text.)

“one of the most contentious components of the proposed ordinances had been an update to the city public accommodations law. Opponents have claimed it would allow predators to put women and children at harm.. Supporters of the ordinance have called such claims scare tactics and said transgender people are most of the targeted for harassment or violence, not the perpetrators of violence.”

I personally feel it was a set up.. knowing that emotions were running high and that there would be camera everywhere, they used it to make a point or a public show.. which seem to work cause after this they were talking about it at the podium.

I have to wonder if the actions of the local Transgender folks are to blame for this failure..