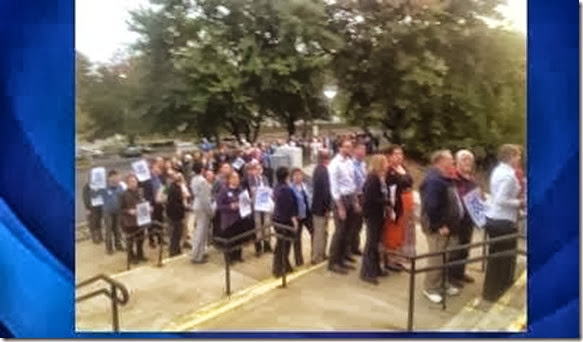 Gay couples lined up this morning outside the office of the Buncombe County registrar, who is issuing but not signing marriage licenses today. Attorney General Roy Cooper is defending the state against the lawsuit brought by the ACLU, even though he personally supports marriage equality. Buncombe County is home to Asheville, arguably the most liberal city in North Carolina.

Can you said false hope…

Recently I decided to check out Matt Comer Facebook page, for some strange reason.. I was shock to read his opinion and the comments from his followers about a 19 yo who has decided to run for public office here in NC.

Even though he is very young and a tea partier the chances of him winning this office (nc house) is very slim, if not impossible. But you have to admired him for trying.

Matt wrote the following, A 19-year-old and recent graduate is running for N.C. House in Surry County. He's conservative and a Tea Partier. He says he wants to "nullify Obamacare in North Carolina." His high school learning is still fresh in his mind, so it's obvious that he either willfully chooses to believe bullshit or just skipped out on all those classes about the Civil War. Nullification? Really? Dude, come join us in reality and the 21st century won't you?

It would seem Matt has an issue with his decision to make sure Obama Care never comes to NC. The young guy used the word nullify, which might not have the been the best choice of word for this action, but it does fit in a way.

Now the comments are at best neutral,

one said he would rather see Matt hailing the initiative of this young man, then opposed to criticizing him for his views. Another commenter  said that he disagree with his views, but glad to see young people getting involved, even if they are from Surry County. Another basically claims the young man has been brain washed.

Yet another commenter thinks the young man is retarded, while another claims he is 50 shades of inbreed. One makes the claim that after high school the only choice was politics or a meth lab.

Now remember Matt is a LGBT Activist and political junkie, he doesn’t list his political party, but I’m sure he is a democrat.

Now if this person was running on the LGBT ticket I’m sure Matt would be promoting and endorsing this person. But since he is a Tea partier Matt feels it open season to attack him.

at October 14, 2013 No comments:
Email ThisBlogThis!Share to TwitterShare to FacebookShare to Pinterest

From Joe My God

Illinois already includes gay people in its public accommodation laws, but that hasn't stopped the local Catholic stormtroopers from lying about what the pending marriage equality bill will mean for busineses. (Which is nothing, of course, since that law is long established and has nothing to do with same-sex marriage.)  Freep the fuck out of this.

I would rather have Employment Security before Marriage Equality..

Yes lets get married, then get fired from our jobs solely because we got married.