their first will be according to a source will be at the Lawson’s Landing, at the NC History Center in New Bern at 6 pm for light Hors d’ oeuvres meeting at 6:30 pm on the 11th of February 2013

at January 31, 2013 No comments:
Email ThisBlogThis!Share to TwitterShare to FacebookShare to Pinterest
Labels: NC Equality

Fair Use of Copyrighted Material

Notwithstanding the provisions of sections 17 U.S.C. § 106 and 17 U.S.C. § 106A, the fair use of a copyrighted work, including such use by reproduction in copies or phonorecords or by any other means specified by that section, for purposes such as criticism, comment, news reporting, teaching (including multiple copies for classroom use), scholarship, or research, is not an infringement of copyright. In determining whether the use made of a work in any particular case is a fair use the factors to be considered shall include:

The fact that a work is unpublished shall not itself bar a finding of fair use if such finding is made upon consideration of all the above factors.

at January 31, 2013 No comments:
Email ThisBlogThis!Share to TwitterShare to FacebookShare to Pinterest

For Matt of Qnotes

interesting, since you said the following, and let me paraphrase "Eastern NC is a waste of time and money" and "we must use our resources where it will do the most good." Funny that the same line from Equality NC, which was proven during the Amendment One campaign, then again they did waste a lot of money on those post cards and stamps. I should know since I got fifty + friends, coworkers and family to fill them out, they were taken to the NCGA the day of the votes.

So please tell me which back stabbing GayINC outfit I should be collaborating with.

however nice to know that you still visit my blog

at January 31, 2013 No comments:
Email ThisBlogThis!Share to TwitterShare to FacebookShare to Pinterest
Labels: Matt H Comer

Do you know what GayInc is? 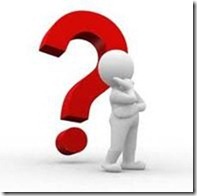 Gay, Inc., are made up with mainstream LGBT organizations such as Human Rights Campaign, Glaad and others that spend tons of dough pushing marriage, gays in the military and the usual lineup of candidates for political office, while ignoring major issues within our national collective community.

at January 30, 2013 No comments:
Email ThisBlogThis!Share to TwitterShare to FacebookShare to Pinterest
Labels: Gay Inc.

I have been in touch with a few folks across this state about the Equality NC Townhall meeting, that were to be set up in January, which never happen, because it was more important for the whole staff of ENC to go to Creating Change in Georgia.. I can only hope they carpooled to save ENC some money..

Anywho, Chris of ENC now is trying to set up three Meeting in Three Cities, base on current issues in those cities.

The meeting in New Bern will cover the recent incident at a local Restaurant, where the owner was exercising his First Amendment rights.. The next is Greenville, to address workplace non-discrimination  and effort to protect them members of the community who works for the  the city. The third and last stop is in Fayetteville, where they want to address the recent discrimination of a Service member and her wife, about joining so member club there..

I have been inform that Chris has try to set the New  Bern meeting up via a third person and is having a huge problem with conflicting dates..

So currently no dates are set, but there is still time and I hope that Chris will get on this asap.

Now we know why Equality didn’t set any town hall meeting in January..

They were to busy at the Creating Change Event in GA.. Yes the hold fucking gang in GA. Leaving only the interns in the offices of Equality nc..

(Image link removed by a self rightness ass Gayincer,, If you would like to see the image in question please click here )

Not sure but I think the copyright is Qnotes,, not sure that is why its hot linked..
I guess this is one work/vacation thing for the staff at Equality,,

lets go to GA and fucking forget about the Town hall meeting we’re to set up in January.. Its more important to party in GA for a Week.. When we get back home we’ll again claim we need funds and do another fund raiser for the three town hall meeting that we might set up in February..
at January 26, 2013 2 comments:
Email ThisBlogThis!Share to TwitterShare to FacebookShare to Pinterest
Labels: CC2013, Image removed, Qnotes

After the folks at NC Equality failed to set any townhall meeting in January like they said they would. Now they have set some up for February,, the first might be in New Bern,

not "official" yet. But Equality NC is holding a Town Hall Dinner Meeting Feb 4th at Lawson's Landing Cafe in the History Center, New Bern.

at January 24, 2013 No comments:
Email ThisBlogThis!Share to TwitterShare to FacebookShare to Pinterest

Equality NC show their incompetence not being able to setup Townhall Meeting.

see they posted this way back in December,

Since Chris and the other were so in incompetent and unable to set any of these dates, for god knows why, they now are trying for February,

Fayetteville (February 2013) Addressing recent incidences of discrimination against service members and their spouses.

yes now they list the issues they want to discuss at each stop, but notice its 3 stops now not six.. I guess donations are down..

so its either Chris’s inability or the group just don’t care.

However their new Director has the time to email everyone about us being in Obama Inaugural address and to beg for money.. see below

President Obama's historic inaugural address yesterday – marking the first time a President has explicitly mentioned "gay" Americans in inaugural remarks – not only spoke volumes about the progress we've made, but also to the work we have yet to do.

In his speech, the President reminded the country:
"Our journey is not complete until our gay brothers and sisters are treated like anyone else under the law – for if we are truly created equal, then surely the love we commit to one another must be equal as well."

Help us complete the journey:

Let's finish the journey we started...together.

I Guess the gang at ENC in Raleigh are effing around, 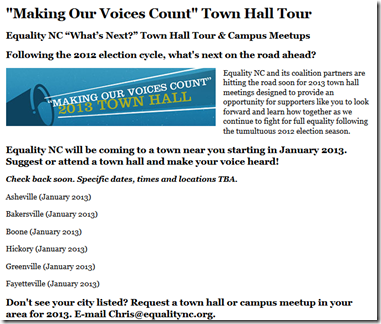 I guess no one in the community had any good/great ideal that they could steal, and claim as their own..

at January 21, 2013 No comments:
Email ThisBlogThis!Share to TwitterShare to FacebookShare to Pinterest
Labels: ENC

Still no dates set for those Town hall Meeting by Equality NC..

not date have been set.. 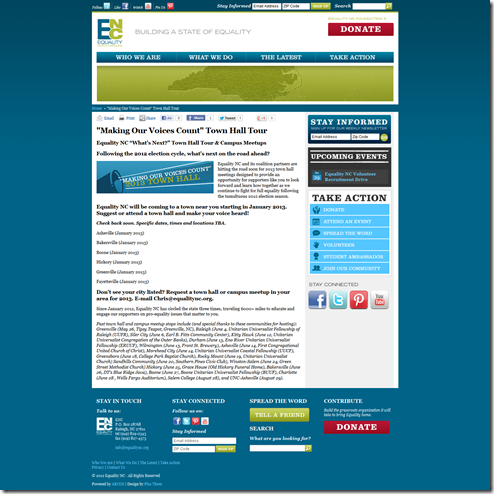 I guess they will hold them all with one day notice, which will resulted in low turnouts.. some outreach.. FAIL. Big time..

at January 18, 2013 No comments:
Email ThisBlogThis!Share to TwitterShare to FacebookShare to Pinterest
Labels: Community, ENC

Equality NC has a Survey Out and need your Help

Equality North Carolina (ENC), in order to meet its 2013 New Year’s resolution to serve its supporters, communities and state like never before, is asking for participants in a quick survey.

ENC has promised to take the results and turn them into positive changes in how the statewide LGBT advocacy organization works for its constituents in 2013.

To join in the survey, visit equalitync.org/survey/.

please be completely honest, let them know their downfalls too.

Like these Town hall Meetings, which as of today still no dates sets for January, See here and here.

I can only guess Chris, Jen, Stuart are just fucking around or looking for someone else ideal to steal.. Hell they won’t even reply to emails asking about the town hall meeting.. I’m sure all these meeting will be at last minute with one or two day notice, which mean low turn out..

Equality NC sleep at the wheel.

15 days into January and now no date set for their Town Hall Meetings.

I guess sucking up to GayInc is taking up to much of their time.. or lusting over those whom recent came out..

wow, really, predicted that Obama would win reelection, come on he had a 50/50 chance of gettting it right..

but because he is gay this matter, NOT only to GayInc assholes that is.. 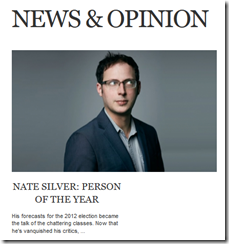 GayINC is destroying our freedoms once strike at a time.. Soon thanks to them we will no longer have Free Speech..

Simply because the Fags and Dykes of GayInc don’t like to be call a Faggot or Dyke, yet in every Gay Pride event there is a group called Dykes on Bikes..

GayINC need to shut the fuck up and get a fucking life.