The End of Don’t Ask, Don’t Tell in North Carolina and the Nation..

This is great news for all those LGBT’s service members, that can finally be free to be who they truly are.. Lets Party…..

However here in NC, one of our only two LGBT News Papers like to think that only the LGBT’s in one certain city, is all that matters..

On September 15th of 2011, this piece “House GOP seeks to halt DADT repeal”, written by the Staff of the Paper (Qnotes)..

As community members across the nation, and even here in Charlotte, prepare to celebrate the repeal of “Don’t Ask, Don’t Tell,” Washington Blade political reporter Chris Johnson reveals new plans by Congressional Republicans to slow or even halt the policy’s repeal. Read more: washingtonblade.com/2011/09/15/house-gop-seeks-to-delay-end-to-dont-ask/

I made a Comment, about it, which has been delete since I’m not allow to comment on Qnotes via Matt Comer…(EQC = editing queen in charge).  Which said “you just could say “here in North Carolina” No you had to single out Charlotte”. it was left on the 15th @ 3:05 pm…

On 19th of September, Qnotes editor Matt wrote another piece about DADT,  Charlotte is listed as first as usual, since it all about Charlotte with Qnotes.. then SC’s Columbia then NC State in Raleigh, last it Fayetteville. However these other cities wouldn’t be listed if it wasn’t for the Service members legal Defense Network.

I feel it time for Jim Yarbrough to rename Qnotes once again.. or at least make it known that Charlotte interests are first.. Maybe he could rename it Charlotte’s Notes, or Queen’s City Notes.

At least when The Front Page was in print their paper was balanced, its wasn’t just Raleigh, Raleigh with them..

This award it awarded to Matt Comer, enjoy it ..

at September 20, 2011 No comments:
Email ThisBlogThis!Share to TwitterShare to FacebookShare to Pinterest

This is the most truth you will ever see from Qnotes.. Concerning Matt Comer..

Yes Matt is intolerant to all those whom don’t shame his ideology.. Matt doesn’t like to be wrong…

Qnotes, all that matters is Charlotte…

As community members across the nation, and even here in Charlotte, prepare to celebrate the repeal of “Don’t Ask, Don’t Tell,” Washington Blade political reporter Chris Johnson reveals new plans by Congressional Republicans to slow or even halt the policy’s repeal.

Charlotte which doesn’t have any really military base at all… seems to think it matter more in Charlotte then anywhere else in NC.. I bet those in Elizabeth City, Fayetteville, Goldsboro, Jacksonville, and Havelock would disagree..

Yes Matt give them ideals why don’t you. 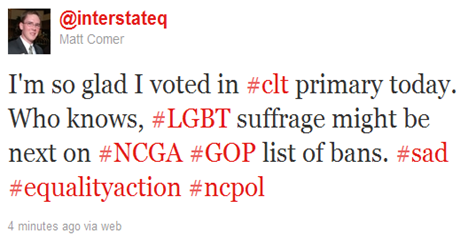 at September 13, 2011 No comments:
Email ThisBlogThis!Share to TwitterShare to FacebookShare to Pinterest
Labels: Matt H Comer

So what now Matt

I would like to thank you for shooting down my partner David, scheduled rally, which was to be today. He had planned a very supportive gathering, but because of your biased opinion of me, you put your journalistic integrity aside and destroyed his ideas with an opinionated and slanderously unsupported writing.

Just think it could have been our voices that Rep. Marcus Brandon would have heard inside the chambers today’s. Instead it was the collective hateful speeches of the anti-marriage supporters. I hope you are happy with yourself. Good looking out for our so-called community.

I guess, thanks to you, ENC vigils and rallies will now be nothing more than a funeral processions for gay marriage in NC. Stay in Charlotte tomorrow – now you have a reason to not to come to Raleigh. We don’t need any more pallbearers. Beside I was taught at a young age that it is bad karma/respect for the person who causes another’s death to show up at their funeral. We will be attending in black mourning attire.

Now that all is said and done I will be calling for a ban on Qnotes, HRC, and mostly ENC for as much good as they did or more likely didn’t do for any of our causes. They are all useless and did nothing to support our community unless it benefits them in any way. Why would any self respecting gay person in North Carolina support any group that didn’t support them for anything by for monetary gains?

From now to May let the filling of the HRC and ENC other Groups Coffers began. After it was all about the money $$$$$$$$

at September 12, 2011 No comments:
Email ThisBlogThis!Share to TwitterShare to FacebookShare to Pinterest

Sent from my Verizon Wireless Phone
at September 12, 2011 No comments:
Email ThisBlogThis!Share to TwitterShare to FacebookShare to Pinterest

Interstateq the Douche bag of the week

After he basically destroyed my partner marriage rally, this jerk won’t event be showing up for the one he push on other.. what a douche bag.. (being nice) 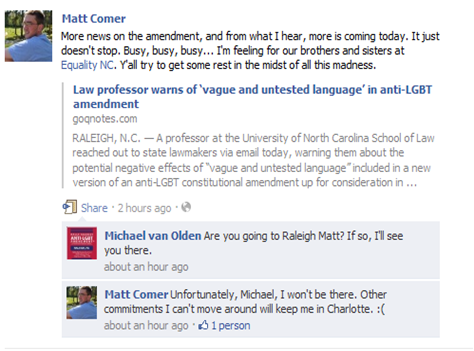 I guess he couldn’t give up his after spot at the Adult Bookstore, servicing those in need.. who knows why.. I know that my partner and I will be, even if I have to bring my two nephews with me, if I can’t find someone to watch for the day..

Why are you endorsing candidates who do not support trans civil rights?

David Howard, Edwin Peacock III, Curtis Watkins, and Dennis Peterson have all indicated they do not support civil rights protections based on gender identity, yet they are listed here presumably endorsed by QNotes.

How are these candidates “LGBT-friendly” if they seek to politically divide our community by only extending rights to some?

Chelsea Sayre, Qnotes really don’t care about that, as long they support the L.G.B, Qnotes is just like HRC, they will throw the T,under the bus just as fast.

at September 06, 2011 No comments:
Email ThisBlogThis!Share to TwitterShare to FacebookShare to Pinterest
Labels: Q-notes

The anti-ssm folks has plan their second Marriage for the year..

Marriage Rally! 10:30 am on September 12, Halifax Mall (behind the Legislative Bldg.). Bring a sign and take a stand for marriage! #ncprotectmarriage

Just stop and think,, If the Marriage Rally that was plan for the 12th went as plan this group would have to clear out by noon, but since it was cancel, they have till 2 pm unless another group got it..

also there are still rumors that these amendments will be heard on that day..

at September 04, 2011 No comments:
Email ThisBlogThis!Share to TwitterShare to FacebookShare to Pinterest

On the evening before the NC General Assembly returns for a special session devoted to consideration of Constitutional Amendments, supporters of equality across the state will gather in opposition to efforts to write discrimination into our State Constitution.
In Greenville, we will gather at the steps of the Pitt County Courthouse (tentative location).
These statewide vigils will be followed by a rally the next day on Halifax Mall (outside the General Assembly Building) in Raleigh. https://www.facebook.com/event.php?eid=179355332136086