Michelle Duggar, what a B*tch 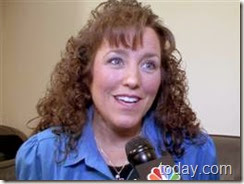 Hello, this is Michelle Duggar. I’m calling to inform you of some shocking news that would affect the safety of Northwest Arkansas women and children. The Fayetteville City Council is voting on an ordinance this Tuesday night that would allow men – yes, I said men – to use women's and girls' restrooms, locker rooms, showers, sleeping areas and other areas that are designated for females only. I don’t believe the citizens of Fayetteville would want males with past child predator convictions that claim they are female to have a legal right to enter private areas that are reserved for women and girls. I doubt that Fayetteville parents would stand for a law that would endanger their daughters or allow them to be traumatized by a man joining them in their private space. We should never place the preference of an adult over the safety and innocence of a child. Parents, who do you want undressing next to your daughter at the public swimming pool’s private changing area?

So how many could be gay, or a lesbian, or Trans, 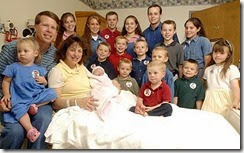 What happen to The Triangle, the other LGBT Paper of NC??

Back in the day North Carolina had a few great LGBT newspapers.. The Front Page, The Triangle, and Qnotes.. Now we are left only with Qnotes, which center all writing and articles on or in Charlotte, with very little content from other parts of NC..

The Front Page back in it days were more focus and included North Carolina as a whole.  The Front Page which was created in the backroom of the White Rabbit when it was in Raleigh merge with Qnotes in 2006, ever since its been a downhill adventure.

Today’s Qnotes is once again centered on Charlotte’s LGBT Community, while basically ignoring the rest of NC, from time to time there will be piece on smaller communities in NC, but they never cover the whole state. Now I’m paraphrasing the following, “ We are a small paper with limited time and money and we can’t include other communities, regularly”. this was said after the question why they were basically ignoring Eastern NC.. However, for some strange reason, many believe Wilmington, NC is apart of Eastern NC, its more Southern then Eastern.

This biweekly edition of Qnotes in the same,, 85+% is about life in Charlotte. I don’t know why they just don’t go back to their old name Queen City Notes, at least it would be more honest in name..

So what has happen to NC other LGBT Newspaper? 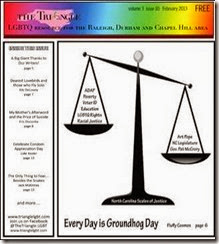 This edition was the last one be published. I remember Karen handing these out at a few Moral Mondays events in Raleigh last summer (2013).

To this date, there hasn’t been anything new from them. I’m sure the lack of community support played a huge part with it closure, but why? The same community in Raleigh/Durham supports Qnotes, but seem not to support the very paper in their own backyard.

So, What the hell is going on in Raleigh, Durham/Chapel Hill LGBT community.. I can only fathom, that if the events of the day doesn’t happen at the local bars, the community could are less.