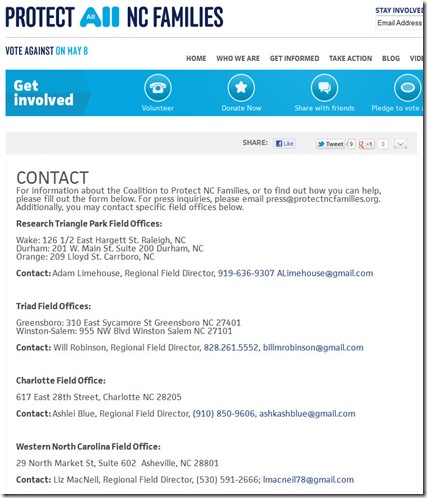 No offices in Eastern NC.. I would have to wonder why?????

at March 30, 2012 No comments:
Email ThisBlogThis!Share to TwitterShare to FacebookShare to Pinterest

VoteForMarriageNC has been very Busy

We have partnered with over 600 churches and pastors who are helping us register new voters, make phone calls, host house parties, knock on doors, and secure the passage of the Marriage Protection Amendment.

It would seem that Tami Fitzgerald and her marry little band of Bigots has been very busy.

I have to wonder what the fuck our groups have been doing??

I know they Haven’t been in the fucking East that much, maybe 1 or two visits that have been reported..

Protect NC, Equality NC, and others are working in the West and Central NC,, and some parts of the South while no giving a damn about the East..

at March 23, 2012 No comments:
Email ThisBlogThis!Share to TwitterShare to FacebookShare to Pinterest 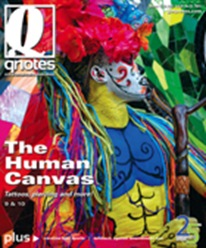 While browsing this bi-weekly  issue of Qnotes I see that nothing has really changed since they got a new editor. It would seem the old one might have left a “do’s and don’t” list for the new editor to follow. I’m sure the first item was everything you print should be about Charlotte first and Eastern NC is a waste of time and money, so don’t worry about whatever happens there.. They are not a part of our LGBT Community.

Point in case, Race to the Ballot stops in Rocky Mount and Greenville North Caroline, the a word or a peep. Its seem that Qnotes couldn’t be bother to mention these events or waste newspaper space..

What is Qnotes issue with Eastern NC? Why does the past and current editor think we are a waste of time and resources? Is it because we don’t have large nite clubs, expressive coffee shops, or the fact that there is no adult type stores in the area.

at March 17, 2012 No comments:
Email ThisBlogThis!Share to TwitterShare to FacebookShare to Pinterest
Labels: Q-notes

In a recent email from Equality NC they stated the following,

Your investment in the campaign against Amendment One to date has allowed us to mobilize thousands of volunteers, hire staff, open field offices and raise a substantial amount of resources to combat the misinformation from the other side. In short, hundreds of you have raised thousands of dollars to seed a million conversations about the harms of Amendment One.

after they let us know that national forces are mobilizing against us (like we didn’t already know) and they are force to ask for more money.. Which is always on the table and in ask in 90% of all emails.

So, they hire staff and open some offices in NC – not across NC only in high lgbt pop areas.

Going by that I can only guess that the direct mail is how they will be contacting those in the East.

Stuart Campbell mention that they raised over $600,000

My question is where did it go??? I hope that they didn’t spend all that on new offices and supplies, t-shirts, and posters? We may never know where all the money went..

They need money now for what they are planning to over the next three weeks,

We ask for your help today, because over the next three weeks we are making critical decisions regarding staff, television advertising, direct mail, and more. The latest Amendment One poll numbers show a majority of North Carolinians are with us, but we must raise the resources to mobilize these fair-minded folks and get them to the polls on May 8. 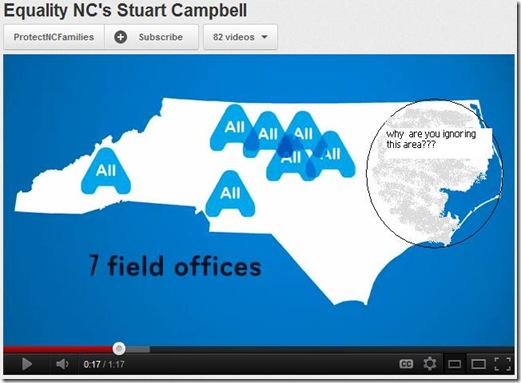 As you can see in the above screen cap, the offices are in central and western NC, nothing in the east. I have email them many times on this why they refuse to so any thing in Eastern NC.

However as of today it would seem that our bigoted friends are doing work in the East. 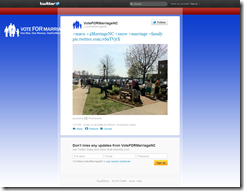 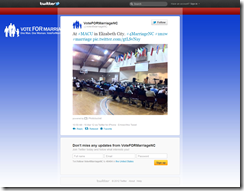 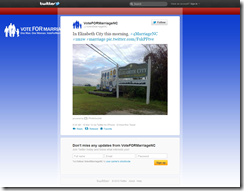 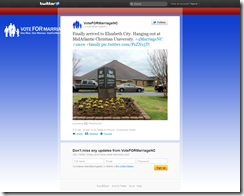 Yes, The VoteformarraigeNC is working the churches and one Bible school in the East to spread their Ideology of matter of marriage. So Where is Equality, and their meme groups,protect nc and Race to the Ballot, your guess is just as good as my.

Race to the Ballot did stop in Rocky Mount,NC and at ECU in Greenville, then they went south..

So glad now maybe she and others will shut up about him not claim that he is against this amendment.