Another Hate Crime in NC

Lets make sure the DA in Case does his/her job..If not lets March on the Court…


A Hickory, North Carolina man called 911 to report that he had murdered his roommate Stephen Starr:
"Anderson is accused of shooting 36-year-old Starr with a shotgun and pistol and also carved a word into Starr’s body." 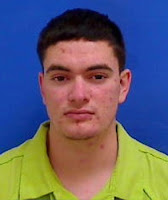 Starr was found in bed in what law enforcement has described as one of the most gruesome crime scenes they’ve seen in years. Anderson was charged with Starr’s murder Monday afternoon and has his first court appearance Wednesday morning. Anderson called 911 while next to Starr’s body in the master bedroom, with a gun still in his hands, according to the 911 call. Anderson was holding the pistol, Fish said. In the call, Anderson says he took some pills that “made me go mad.” He tells the woman at the communications center that he shot his roommate three times and then used an ax and mutilated his body. “I Od’d on Mucinex DM. Dextromethorphan makes me feel a little weird and I took too many,” Anderson said.

About 4 minutes and 30 seconds into the call, the telecommunicator asks what sparked the attack. Anderson said it was because he was straight, and Starr was gay. According to him, the two met at a gay club. Anderson said he was straight, but went to the club to experiment. “I met him and went to his house and he took me in and I turned straight again. And he wanted to touch me and stuff and I wouldn’t let him, and he kept trying. And I waited until he went to sleep and then I shot him three times. And I mutilated him very badly and I’m sorry, I’m sorry. Oh God, please help me.”