So it is a personal contribution and thus, of no concern to Mr. Meredith. Of course, those of our "sexual preference" make personal decisions all the time about where to spend our money. Money that filled the personal coffers of the Cinemark bigwhigs, enabling the CEO to make a $10,000 donation in support of Prop 8.

In my response, I explained that I would prefer to see Mr. Meredith take the lead to offset the damages his corporate revenue have done to those in my community before I spend money a this local theaters. I encouraged him to seek out opportunities to support GLBTQ organizations in the Pittsburgh region -- I even made a few suggestions. And I explained that my sexual orientation is no more a preference than his.

In the meantime, I'll go elsewhere with my movie dollars.

She wrote to the company, they reply saying that the company didn't make a donation to either side.

So it was a Personal donation. I can only guess that PghLesbian wants us to boycott Cinemark. By doing so we will be hurting those who work for this company. What PghLesbian is forgetting is that in many community Cinemark is the game in town. This is really getting out of hand. I wonder what our LGBT company owner would do if someone from yes on 8 posted they names and call for boycotts on them, better yet had protest outside of their place of business.

This type of so-called activism need to stop. We are hurting other people who depends on these owner.

We need to get over this and move on. Lets wants to see what will happen in the courts. 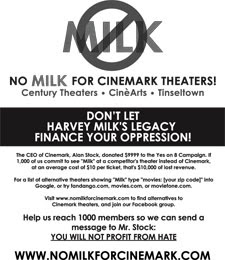 It was also revealed over the weekend that the main cinema used by the Sundance Film Festival is a Cinemark cinema. The CEO of Cinemark, Alan Stock, gave $9,999 to 'Yes on 8'. Cinemark operates the 'Century', 'CinéArts', and 'Tinseltown' theater chains. Sundance won't pull out of the anti-gay cinema. While Sundance is one issue, Cinemark also stands to profit from showing the Gus van Sant film Milk in its theatres. A group has sprung up online boycotting Cinemark theatres and encouraging viewers to see Milk at an alternative theatre chain.

Now I guess in the near future they will be calling for a boycott on Sundance.
at November 17, 2008
Email ThisBlogThis!Share to TwitterShare to FacebookShare to Pinterest
Labels: Other blogs, Prop8